Book presentation: The Stories Were Not Told, by Sandra Semchuk 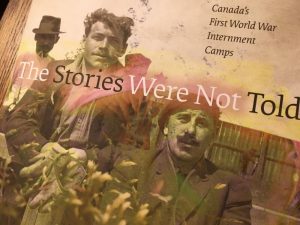 Please join us for the presentation and launch of the book “The Stories Were Not Told: Canada’s First World War Internment Camps” by Sandra Semchuk.

PROGRAM:
Cathie Crooks from the University of Alberta Press will open the event. Borys Sydoruk, UCCLA will make remarks on the history of the Internment recognition. Donna Korchinski will share her view as a descendant. The author Sandra Semchuk will show images and do readings of stories from the book. Book signing will follow.

ABOUT THE BOOK:
From 1914 to 1920, thousands of men who had immigrated to Canada from the Austro-Hungarian, German and Ottoman Empires were imprisoned as “enemy aliens,” some with their families in 24 camps across Canada. Many communities in Canada where internees originated do not know these stories – Ukrainians, Germans, Bulgarians, Croatians, Czechs, Hungarians, Italians, Jews, Alevi Kurds, Armenians, Ottoman Turks, Poles, Romanians, Russians, Serbians, Slovaks, Slovenes, amongst others. Most were Ukrainians; almost all were civilians. Through memory work and photography of internment camp sites Sandra Semchuk speaks about how she created a space for the internees and their descendants to tell their stories. She describes how lives and society have been shaped by acts of legislated racism and how to move toward greater reconciliation, remembrance, and healing. Her work is helpful for anyone seeking to understand the cross-cultural and intergenerational consequences of Canada’s first internment camps within a local and national context.

ABOUT THE AUTHOR:
Sandra Semchuk, a photographer, video artist and author based in Vancouver, British Columbia, is a winner of the 2018 Governor General’s Awards in Visual and Media Arts. She is Associate Professor at Emily Carr University.

Published by the University of Alberta Press with the support of the Canadian First World War Internment Recognition Fund.

The presentation and event will take place on Sunday, February 10 from 1 to 3 pm at the breathtaking Calgary New Central Library, Performance Hall. There is plenty of free parking downtown on Sundays. For those using pubic transit, the closest CTrain stop is City Hall.