SAVE THE DATE
Online (a registration link to follow)

The unsung success story of Canadian military and police training in Ukraine”.

Ambassador Waschuk’s presentation will also touch upon the role played by Ukrainian special forces in rescuing over 100 Canadian citizens and Afghan political refugees during the dangerous and chaotic final days of the U.S. withdrawal from Afghanistan. 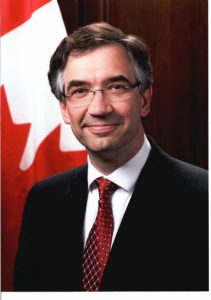 Roman Waschuk (born 1962 in Toronto, Ontario) holds BA and MA degrees in History from the University of Toronto. After working as a historical researcher for the Commission of Inquiry on War Criminals (1985-1986), he joined the Canadian Foreign Service in 1987. In Ottawa, he worked on Soviet affairs, Central and Eastern Europe, EU relations, policy planning, and stabilization/reconstruction programming. Representing Canada abroad, he was posted to Moscow, Kyiv, and Berlin, and served as Ambassador to Serbia, Montenegro and North Macedonia (2011-2014) and as Ambassador to Ukraine (2014-2019). He retired from Global Affairs Canada in December 2019. He is a recipient of the Canada 125 Medal, the Minister’s Award for Foreign Policy Excellence, the Ukrainian Canadian Congress Shevchenko Medal, and Ukraine’s Order of Merit. In 2021, Mr Waschuk joined the Supervisory Board of Promprylad. Renovation, a social impact investment project in Ivano-Frankivsk, Ukraine. He is also a Board member of the Canada Ukraine Foundation and the Ukrainian Canadian Research and Documentation Centre.