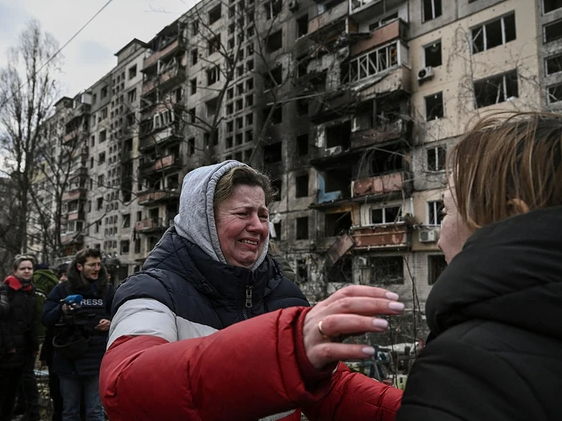 The world’s leaders it seems, are becoming increasingly inured to the heartrending pleas from Kyiv

Author of the article:

First, a basic truth. The only way to stop the ongoing murder in Ukraine is by intervening with physical force. Resolutions of condemnation and economic penalties are unlikely to have any effect.

It is therefore shocking to observe far more agreement within NATO on the red lines it will not cross in assisting Ukraine against Russian aggression, than on the red lines it will not allow Vladimir Putin to cross in his campaign against the people of Ukraine. Indeed, to date, not one world leader has had the courage to answer the following question: How many Ukrainian civilians must be murdered before any of the 141 countries signing the UN resolution condemning Russia’s invasion of Ukraine will take immediate, concrete steps to stop the slaughter?

The world’s leaders it seems, are becoming increasingly inured to the heartrending cascade of pleas from Ukraine — every minute of every day — for assistance in stopping the relentless, merciless and criminal bombing of its civilian population. NATO, for its part, remains steadfast in its refusal to place “boots on the ground” (and pilots in the air) to prevent Putin’s ongoing annihilation of Ukraine. This, however, misapprehends Ukraine’s fundamental request. It is not for allied soldiers to fight alongside Ukraine’s military. Rather, it is a plea for the weapons and equipment Ukraine needs to neutralize Russia’s air superiority itself, such as fighter jets, more anti-aircraft missile systems and drones.

NATO is concerned that any escalation in the assistance it provides to Ukraine may lead to World War Three and an all-out nuclear war. This is what Putin has threatened and, apparently, what the alliance fears.

There is a problem with this pledge of inaction, at least for Ukraine and its beleaguered civilians. It leaves them vulnerable to Putin’s attacks, which the world continues to watch in horror on TV each night, while suffering, at least somewhat, from the pangs of a less than clear conscience. Ukrainian President Volodymyr Zelenskyy has not been the only one to say Russia’s invasion “shows signs of genocide.” One might reasonably ask, does anything of substance remain of the world’s post-Holocaust promise of “Never again?”

Let us draw some conclusions from this.

Second, if Article 5 is not a bluff, then the rationale for declining Ukraine’s requests falls apart. In a word, NATO cannot have it both ways. It either fears nuclear confrontation with Russia and will avoid it at all costs, or it doesn’t and won’t. Clearly, NATO’s commitment to collective defence, if resolute and inviolate, constitutes a complete rejection of Putin’s nuclear blackmail. So why the fear of assisting a country whose innocent civilians are being slaughtered?

Third, whether or not Article 5 is a bluff, by refusing Ukraine’s plea for the military hardware it requires to defend itself against war crimes being committed by a much larger, much more powerful, nuclear-armed invader, NATO is providing a green light to all similarly inclined predator states possessing a nuclear arsenal. The corollary to this is also telling. While the lives of people living in NATO member countries may be worth saving at all costs against foreign aggression, the lives of Ukrainian citizens (and, more generally, of all people living outside NATO countries) are not.

Fourth, if Article 5 is not a bluff, there may be another, more cynical reason underpinning NATO’s desire to limit its involvement in militarily aiding Ukraine. That is, from NATO’s perspective, there are advantages to remaining on the sidelines until Russia either loses its war with Ukraine, or occupies Ukraine but then sustains mortal wounds following many years of unsuccessfully fighting an unforgiving guerrilla war led by a determined Ukrainian resistance. Either way, Russia suffers a crushing defeat, NATO wins, and Ukraine … well, Ukraine is yet again abandoned by the world in its time of need, to suffer unbearable losses and unimaginable destruction, before rising again from the rubble, to rebuild and renew its democracy, restore its sovereignty and independence, and take all necessary steps to never again rely on the promises of others as it did, most recently, in 1994. As the world well knows, under the Budapest Memorandum, Ukraine voluntarily transferred its entire nuclear arsenal to Russia in exchange for promises from America, the U.K. and Russia to protect its sovereignty, independence and territorial integrity. It’s unlikely to ever make a mistake like that again.

One prays the above supposition is wrong. But unless NATO provides Ukraine with the military equipment and assistance it needs to defeat Russia, NATO’s excuses for declining such aid will forever remain suspect.